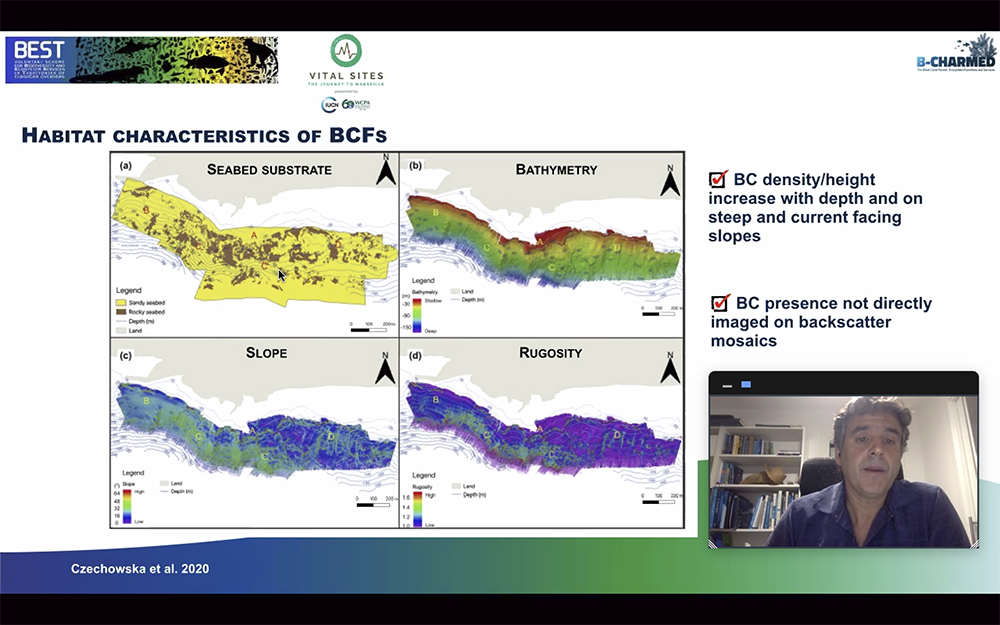 The B-CHARMED project (The Black Coral forests as unexplored Biodiversity Hotspots in the MAcaronesian Region: ecosysteM functions and sErvices analysed) took part last December 10th in an webinar organized by the Division of Protected Areas of the International Union for the Conservation of Nature (IUCN), to explain its progress on its research on the black coral forests of Lanzarote (Canary Islands).

The aim of this webinar oriented to the "Monitoring through eco-acoustic techniques applied to the conservation of marine biodiversity" was to share good practices and results achieved on marine conservation in projects financed by the European Union in the outermost regions and overseas territories. This meeting also established dialogues on the role of Overseas Europe regions and the challenges faced by these territories for the conservation of their natural heritage.

The webinar, included between the events leading up to the IUCN World Conservation Congress in 2021 to be held in Marseille, focused on two scientific initiatives that use eco-acoustic techniques. During the webinar, a general description was also made of the achievements of the BEST programme financed by the European Commission (DG Environment) and managed by the IUCN's Marine Protected Areas Division.

One of these two initiatives was B-CHARMED, whose research focuses on the underwater black coral forests of Lanzarote. Its aim is to understand their structure and functioning, developing acoustic tools that allow their mapping and defining their minimum conservation unit. These outcomes will allow the implementation of measures to maintain their functions and ecosystem services.

Francisco Otero-Ferrer, associated researcher of the Biodiversity and Conservation Group of the ECOAQUA Institute and leader of the project, presented the main lines of action, explaining that with their arborescent morphology, the black coral communities form authentic underwater forests, modifying the marine environment and influencing other associated marine species.

"As a consequence of the depth in which these habitats are usually observed in the Macaronesia, they are little known, with scarce data on their spatial distribution and the functions and ecological services they supply. The B-CHARMED project that began this year is developing acoustic methodologies allowing the characterization and mapping of these marine forests and their associated biodiversity for the island of Lanzarote," said the researcher.

With the data collected in these months, it has already been possible to obtain detailed information on the type of substrate, the bathymetry of the study area, as well as the slope and roughness of these underwater forests.

B-CHARMED, in which IU-ECOAQUA participates, is led by the Atlantic Biodiversity and Sustainability Association (ABAS), located in Gran Canaria (Spain), has as main partners, the Leibniz Institute for Baltic Sea Research in Warnemünde (IOW) from Germany and the Benthic Environment Ecogeochemistry Laboratory in Banyuls sur Mer (LECOB) from France.